Blood Pressure and the Pressure to Change 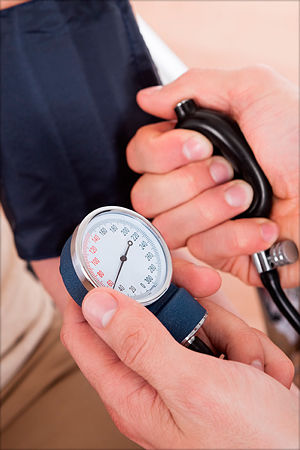 My father-in-law had high blood pressure. I recall when he would be visiting with us, he would often complain of headaches and not feeling well. On checking his blood pressure I was shocked at high it was: 160/105 was not uncommon. I suggested he get treated. I also told him he should cut out the coffee and other caffeinated drinks. He was not compliant. A few years later, he suffered a massive stroke, which eventually took his life.

It is well documented that treating patients with very high blood pressure (for example: 200/110 or 170/105), reduces their chance of strokes, heart attacks and death. It would seem logical then, that you would have the same results when treating moderate blood pressure. Moderate blood pressure is where the systolic number (top number) is 140-160, and the diastolic number (bottom number) is 90-99. Many doctors try to keep their patients’ BP as close to 120/80. But why this number? Had it been tested, or was it based on a well-educated assumption?

A recent article in JAMA (Journal of the American Medical Association) addressed this question. The observation was that there had been no well-designed, independent studies challenging the assumption that moderate BP should be treated at all. So about 6 years ago, the Cochrane Group was commissioned to design a study to answer this question. No drug company money was involved. According to the JAMA article, this was one of the best designed studies looking at blood pressure.

The study was 5 years long (the gold standard for many medical studies) with 10,000 participants. The results came out in Aug 2012. And the results were shocking. Treating BP in the range of 140-160/90-99 does NOT reduce heart attacks, strokes or death! The only exception was that people with pre-existing heart disease may get some benefit.

As you would expect, this caused quite a stir in the medical community. After all, for years, doctors in good faith, had been trying to keep their patients’ BP at what was considered the optimal 120/80, using every drug and device to achieve this. I read with interest some of the doctors’ comments to the study. One doctor felt the study should have been a 10 year study, even though the study had met the medical gold standard. Another comment: “I have always treated patients with the goal of keeping their BP at 120/80. Why change now?”

Doctors practice medicine. It is an evolving science. Once doctors believed that leeching the body of blood would cure disease. Thankfully that practice was proved inaccurate. In order to advance and improve the practice of medicine, we need to continue to ask questions and to test assumptions. And when the evidence shows an assumption is inaccurate, we need to be willing to change.